A Facebook page called ‘Teesside Connected’ revealed the story of the gaping open potholes that could be fatal to drivers and pedestrians and the way they were eventually fixed.

One morning, an anonymous artist decided to sketch giant peni*ses all over them, so they were almost immediately repaired, even though the same issue was left unfixed for a whole year before that.

Locals praised the artists and said that his ‘artistic touch’ in their area was highly beneficial.

According to a spokesperson for the Middlesbrough council, under which Teesside resides, the matter of potholes had been their priority for a long time, as they pose a serious danger to people, but they were delayed as they were currently working on pre-planned projects in the Acklam area.

Yet, this is not the first time this situation has come to the limelight. A street artist, known as ‘Wanksy’, creates sketches of genitalia over potholes to urge authorities to fix them.

Wanksy says that genitalia art attracts the public eye, and it should not be seen as offensive, as anatomy for the whole had been a common area of art, including Botticelli’s ‘Venus’. 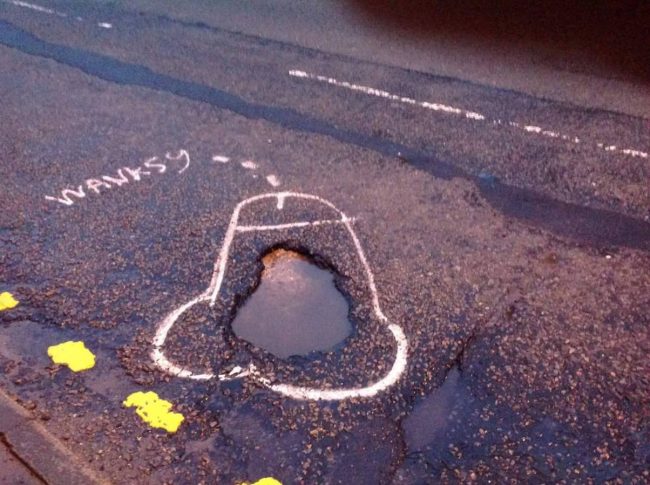 On their website, Wanksy explains that potholes are dangerous, and despite wrecking vehicles and causing accidents, they also injure cyclists and harm pedestrians. This artist says that s/he highlights dangerous potholes by turning them into temporary works of art, in order to make them easily visible and to prompt the council to repair them. 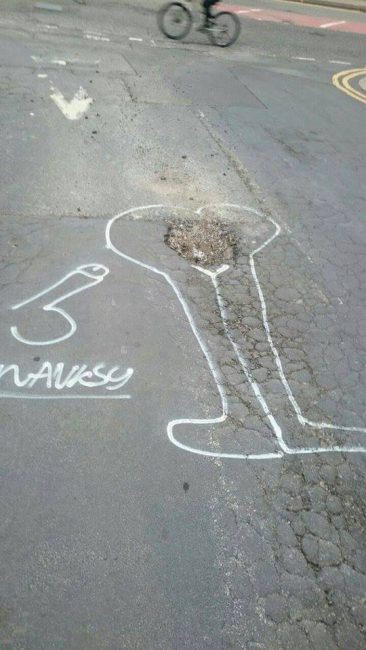 This work surely does not make the council too happy, but the problem is that even though each and every vehicle owner in the land pays road tax, fuel tax, and council tax, that money is apparently not spent on the roads, or it is not spent in an efficient way.

Wanksy also uses the same kind of non-permanent markers that the council uses to repair potholes, so no harm was done as they can be easily removed.

All the council needs to do is to repair them, and the marks are gone!