(UroToday.com) During the second prostate cancer session at the 2020 Annual Meeting of the Society of Urologic Oncology (SUO), Drs. Neal Shore and Ashley Evan Ross debated the use of relugolix as a new standard of care for androgen deprivation therapy (ADT) for the treatment of prostate cancer.

This debate follows the publication of the HERO trial,1 A Study to Evaluate the Safety and Efficacy of Relugolix in Men With Advanced Prostate Cancer (HERO), which was published in the New England Journal of Medicine in June 2020 and of which Dr. Shore is the lead author. This was a randomized controlled comparing relugolix, an oral gonadotropin-releasing hormone antagonist, to leuprolide. 120mg relugolix was given by mouth daily and leuprolide was given every 3 months as depot injections. The primary end point was “sustained castration”, meaning a testosterone level <50 ng/dL at 29 days, at 48 weeks, and at every scheduled measurement in between. In the trial, relugolix demonstrated superiority in the primary outcome (96.7% vs 88.8%) and several secondary outcomes including major cardiovascular events (2.9% vs 6.2%), profound castration on day 15 (78% vs 1%), and median testosterone level 90 days after treatment cessation (280 ng/dL vs 58 ng/dL).

Dr. Shore then pre-emptively addressed the issue of adherence, which he wisely anticipated in this debate of an oral drug vs a depot injectable. He did so by citing data showing high rates of adherence to currently approved oral antiandrogen medications, abiraterone, and enzalutamide, with mean medication possession ratios of >92-95% in two studies.3,4 He also highlighted a recent study which showed relatively high rates of late doses of LHRH injectables (22% late by >1 week using the calendar definition of “month”), with correspondingly increased rates of supratherapeutic testosterone levels (5 vs 27% T>50 ng/dL in those receiving doses on-time vs late).5 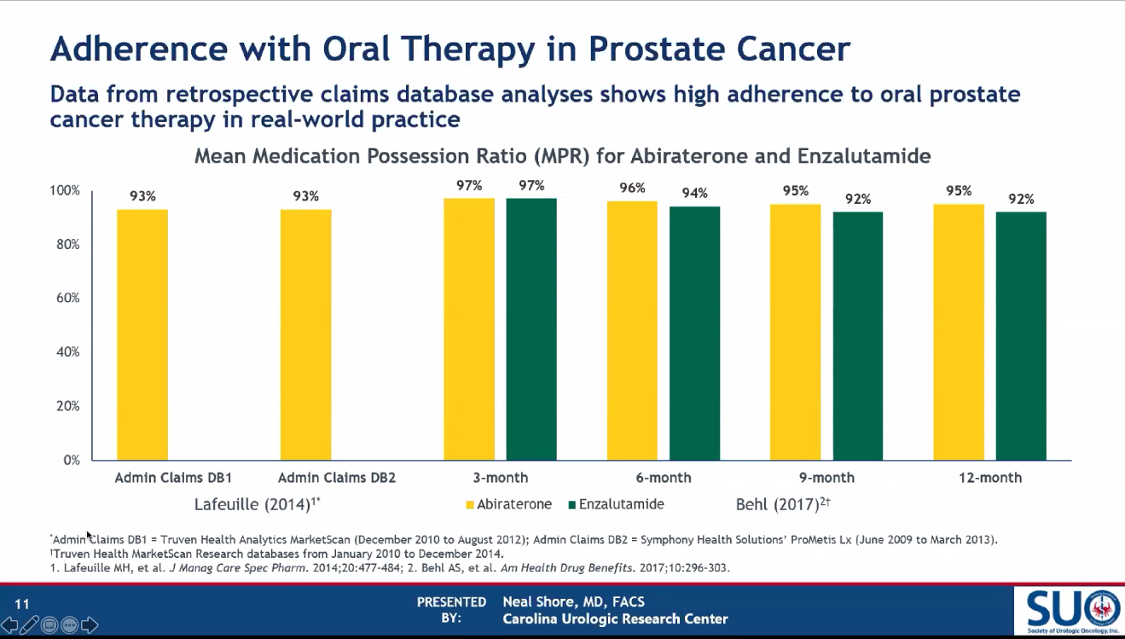 Dr. Ashley Ross then began his rebuttal by pointing out that the effect of relugolix on oncologic endpoints remains entirely untested. The use of hard endpoints for any novel anticancer agent is of course dogma, but Dr. Ross went on to present several plausible reasons why they may be relevant specifically in the case of relugolix. First, the rapid recovery of testosterone levels after cessation of relugolix, which is touted as an advantage by its proponents, may actually be detrimental. At 2 years following 6 months of LHRH antagonist-based ADT, over 50% of men will not have full testosterone recovery, which may actually have significant therapeutic benefit for patients receiving concurrent ADT and radiation for localized prostate cancer. 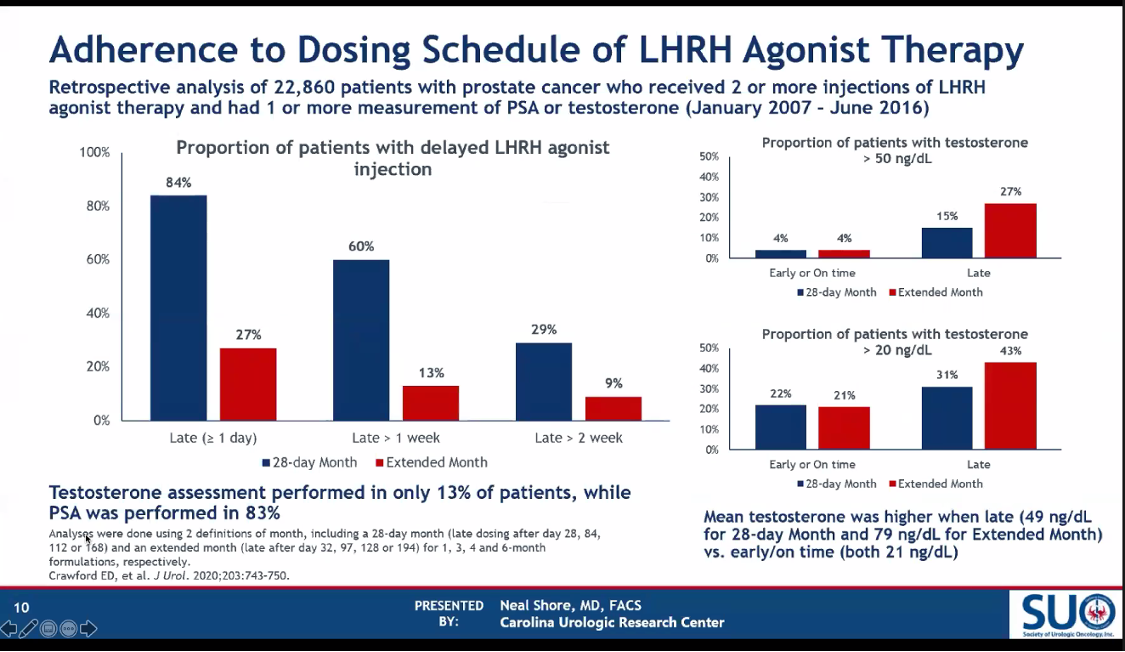 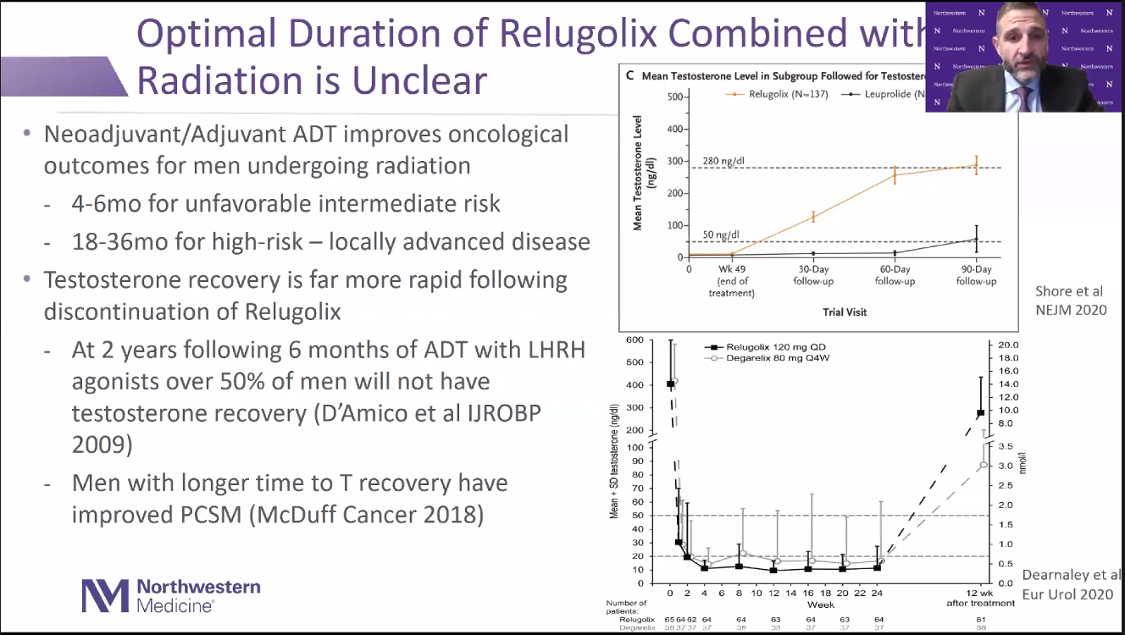 Second, ADT is very frequently given with multiple other agents. Relugolix is a small molecule, unlike the synthetic peptides leuprolide and goserelin, and its drug-drug interactions with other therapeutic agents for prostate cancer have not been fully explored.

Dr. Ross then addressed the issues of MACE and compliance. With regards to MACE, Dr. Ross pointed out the low absolute risk reduction among patients without a prior history of cardiovascular disease (2.8 vs 4.2%). With regards to compliance, adherence to oral ADT, especially as monotherapy, may be significantly different than the more advanced antiandrogens, which have a different side effect profile and are taken by a different patient population. He illustrated this by referencing data that suggests rates of adherence to oral tamoxifen in the 41-72% range.

A review of relugolix by the United States Federal Drug Administration (FDA) is expected to complete in late December. Which side of this debate the regulators land on will be the first hurdle to the adoption of relugolix in practice.