At 32, Georgie Kats had it all – a successful career, a handsome husband and the news she’d always wanted: she was pregnant with their first child.

The glamorous advertising director had ‘always cruised through life’, hitting milestones like travelling the world, falling in love, getting married and having a baby at the perfect moment, one straight after the other.

Eight months into her pregnancy, her mother spotted a small, flesh coloured lump on the side of her left foot while they sat together at home in Melbourne one evening in August 2019.

She didn’t know it then, but that seemingly innocuous lump was the first warning sign that a rare form of cancer was growing in her leg, and doctors would amputate just nine months later. 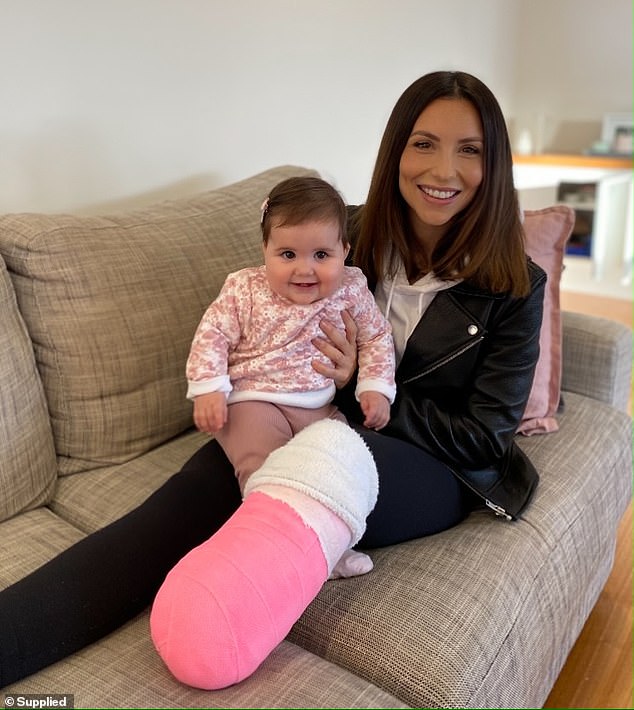 Georgie with Antonia in May 2020, three weeks after losing the lower part of her left leg

Her gynaecologist dismissed it as a harmless cyst and advised her to ‘leave it alone’ until she delivered her baby. Georgie agreed and basked in a ‘blissful’ three months with partner Chris, 35, after their daughter Antonia arrived in September.

By December, the lump had swelled to the size of a large marble so Georgie sought a second opinion from her GP who reiterated it was nothing to worry about.

Reassured but frustrated by the protruding growth that was now stopping her from sliding into her favourite heels, she made an appointment with an orthopaedic surgeon to have it removed.

‘Who would of thought my vanity one day would save my life,’ Georgie told Daily Mail Australia.

But when the surgeon began draining fluid from the ‘cyst’, the look on his face told Georgie that something more sinister was wrong. 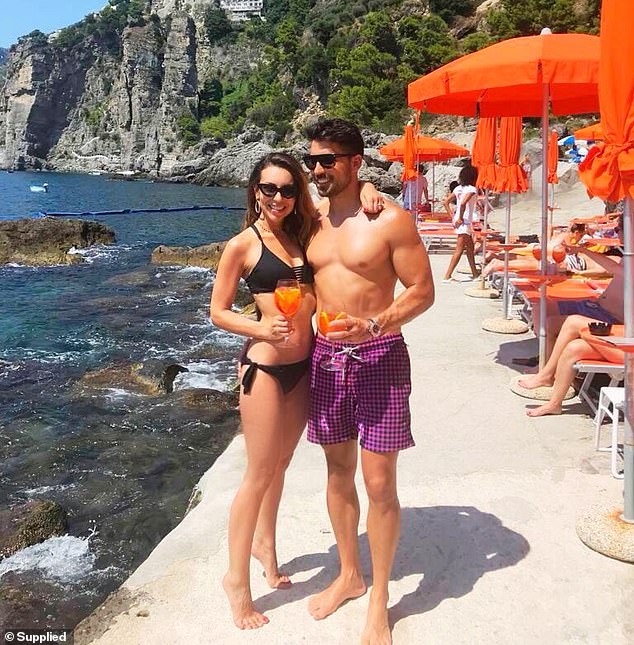 Georgie and Chris on holiday in Capri, Italy in August 2018, two years before her mother would notice the cancerous lump on her foot

Still, feeling fitter, healthier and stronger than ever, cancer simply wasn’t on her radar, least of all an aggressive tumour, six centimetres long.

Doctors immediately ordered a biopsy and Georgie was given the devastating news that an exceptionally rare soft tissue sarcoma called myxoid liposarcoma was growing inside her foot.

She recalls pain and fear flooding her body as her mind raced from one overwhelming question to the next, like what would happen to her husband and beloved baby girl if she died.

‘You never really think it will happen to you, especially not at my age,’ she said, adding when two medical professionals tell you it’s a cyst, ‘you believe it’s just a cyst’.

‘I would call my sisters and tell them my brain hurts, my lymph nodes hurt, I think the cancer has spread. Even though I new I was being ridiculous, I was petrified. I just didn’t want to die.’ 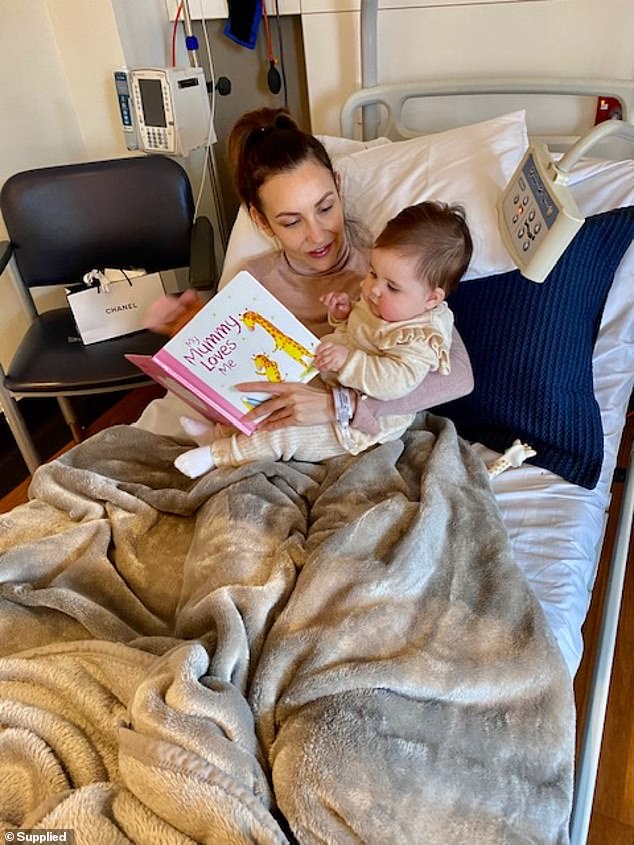 Georgie is one of just 92 Australian women aged 25 to 39 who are diagnosed with a specified type of soft tissue sarcoma every year, figures from the Australian Government’s cancer research website show.

Liposarcoma is a type of cancer that begins in fat cells, usually in the muscles of the arms, legs or abdomen. It typically affects people aged 40 to 60 but has been known to occur at any age.

It accounts for just one percent of adult cancers worldwide.

Symptoms are vague and easily confused with everyday complaints like indigestion, stress and generalised fatigue, which often leads to considerable delays in diagnosis. They also vary depending on where the cancer grows.

Liposarcoma that forms in the arm or leg like Georgie’s did can cause a painless lump of tissue to grow beneath the skin, swelling, pain or weakness in the affected limb.

Georgie experienced no pain or discomfort in the lump or any other part of her foot, and said if her mother hadn’t noticed it she probably never would. 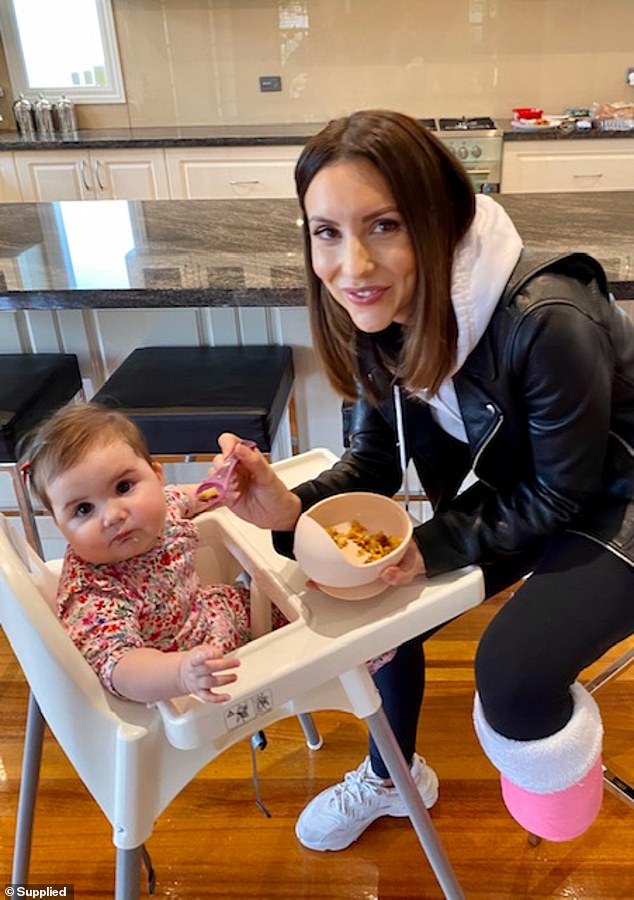 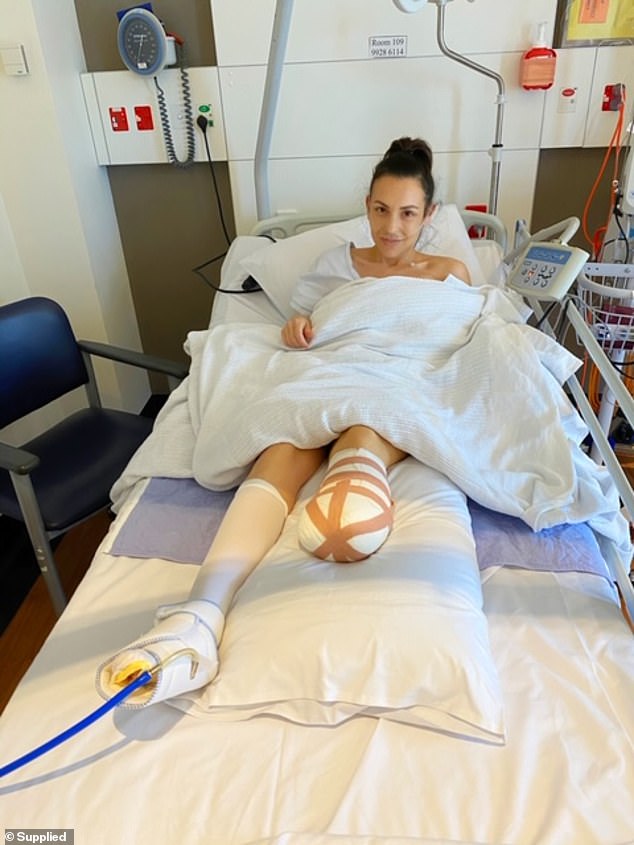 Brave Georgie after her surgery on Wednesday, May 6, 2020

Liposarcoma signs and symptoms vary depending on the part of the body where the cancer grows.

Liposarcoma that forms in the arms and legs can cause a growing lump of tissue under your skin, pain, swelling and weakness of the affected limb.

Liposarcoma that forms in the abdomen can cause abdominal pain, abdominal swelling, feeling full sooner when eating, constipation or blood in the stool.

The cause remains largely unclear, but doctors know that liposarcoma begins when a fat cell develops mutations in its genetic code.

The mutations – or ‘errors’ – cause the cell to multiply abnormally, the result of which is a malignant tumour.

Several types of liposarcoma exist, some that grow slowly and stay in one area of the body, and others that spread rapidly which significantly reduces the chance of long-term survival.

In good news for Georgie, tests revealed the cancer had not yet spread and doctors immediately scheduled 28 daily sessions of radiation to destroy the disease. 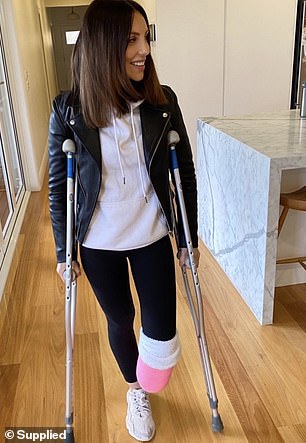 Georgie after the amputation, which reduced the risk of cancer reoccuring to 30 percent

The treatment was successful, but to give the young mother the best chance of survival, doctors advised an amputation of the leg below the knee, a difficult pill she bravely swallowed on Wednesday, May 6.

‘I just cried the whole way into the operating room. Even when they were putting me to sleep I remember tears were streaming down my cheeks. The sadness was overwhelming,’ she said.

‘If I’m being completely honest, the amputation was a harder pill for me to swallow than when I was first diagnosed with cancer. I mourned the loss of my limb like a death,’ she said.

‘But I also understand there are many cancer patients out there who don’t get an opportunity like this to survive, so I am thankful that I get to continue living in a different but in a more intense, grateful and happy way.

‘I may look physically different, but that’s all that has changed. Cancer may have taken half my leg, but I’ll never let it take my spark.’

She says being alive with Antonia and Chris is ‘the best feeling in the world’. 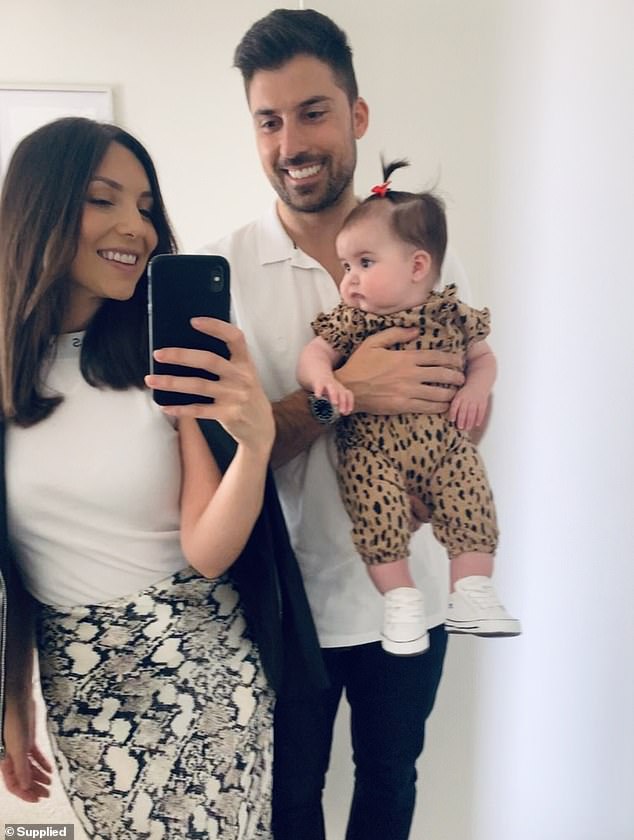 Georgie has shared her story in the hopes of encouraging young adults to take control of their health and keep track of changes in their bodies, no matter how insignificant they might seem.

She is also eager to raise awareness about rare cancers like soft tissue sarcoma, which are under researched due to a lack of mainstream funding.

‘Every cancer deserves to have a voice. Cancer is cancer and we all deserve an equal opportunity to fight and survive,’ she said.

To learn more about rare cancers in Australia, visit RareCancers.org.